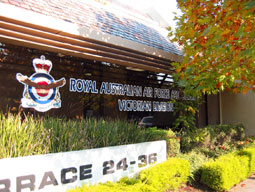 The Victorian Air Forces’ Centre 24-36 Camberwell Road, East Hawthorn was officially opened on 20th May 2006, by the then Minister of Veterans Affairs, Mr Bruce Bilson, who stated during in his opening speech:

“The new centre in Hawthorn East will provide a permanent home for the Association and a place where the people, places and events in the history of the Australian Flying Corps and Royal Australian Air Force can be honoured and the great stories told. For 86 years, the RAAF Association has provided important support for current and former members of the Royal Australian Air Force and its allies and the Centre will display significant commemorative artwork and memorabilia for members of the community to learn more about the RAAF story.”

Members and Branches are able to access all meeting and function rooms, subject to prior reservation (coordinated by the Administrative Officer).

All meeting rooms have desk top computers as well as additional internet access. No charge is levied for use of the computers or internet capability.

A number of under cover parking areas are reserved for RAAFA use. Additional parking (non-meter) is available along Camberwell Road.

Travel to the Victorian Air Forces’ Centre by Public Transport (train and tram) is possible but involves covering about two city blocks from the closest station/tram stop. Members with restricted mobility will generally require vehicular transport.

The Centre is within reasonable walking distance of the Burke Road (major) shopping complex and there is a Bistro/Hotel almost adjacent.