In Memory of Two Brave Squadrons

On Tuesday 19 February, the bombing of Darwin in 1942 was re-enacted with air raid sirens, guns and fighter planes, WWII veteran Brian Winspear, 98, was there to unveil a long-awaited plaque in recognition of his fallen RAAF colleagues from No 2 and No 13 Squadron.

Flying in the islands now known as Indonesia and Timor, and out of northern Australia, the RAAF’s No. 2 and No. 13 Hudson bomber squadrons were all but wiped out in their World War II operations. The two squadrons were in Darwin from 1941 to 1943, losing 200 aircrew and 9 out of their 12 aircraft.

In recognition of their heroism - unprecedented or duplicated in RAAF history – both squadrons were awarded the United States Presidential Unit Citation (see photo below).  But until now they have had no formal commemoration in their own country.

As part of a project strongly advocated by the last surviving air crew member, Flight Lieutenant (Ret) Brian Winspear AM and supported by the Order of Australia Association, Northern Territory Branch and the City of Darwin Council, a commemorative plaque – ‘In Memory of Two Brave Squadrons’- was unveiled in Darwin by Mr Winspear. The bronze plaque sits on Darwin’s Cenotaph.

Brian served in the RAAF from December 1940 to November 1945 and during this period he was posted to both Darwin and Timor with No 2 Squadron (Hudson Bomber) flying as a wireless operator, rear air gunner and navigator. At the time of his discharge, he was serving as the Squadron Signals Officer with the rank of Flight Lieutenant.

Brian resides in Tasmania and is the author of ‘My Back Seat War’, based on diaries he kept during the war. He recently gifted one of the last copies of his book to the Air Force Association’s own No 2 Squadron Branch. 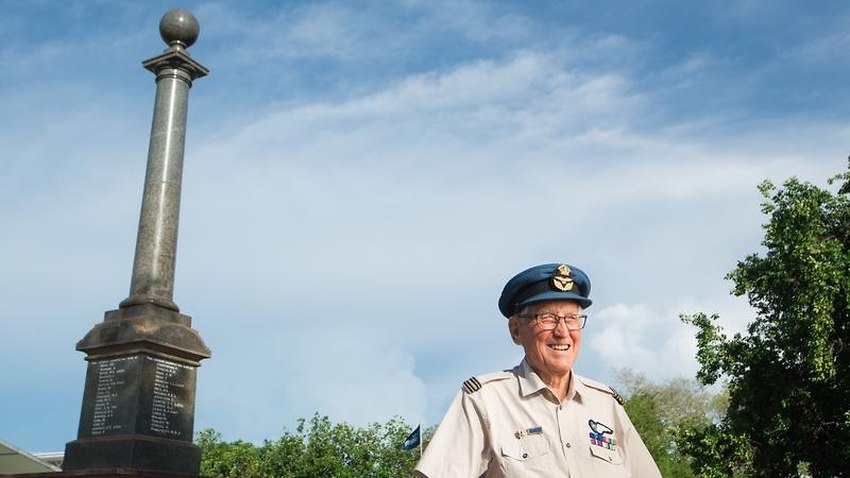 Above: FLTLT Brian Winspear (ret’d) returned to Darwin for the 77thanniversary of the Darwin bombings to unveil a commemorative plaque honouring 2 and 13 Squadrons. (Image source: AAP) .

Above: The United States Presidential Unit Citation is awarded to units of the uniformed services of the United States, and those of allied countries, for extraordinary heroism in action against an armed enemy on or after 7 December 1941.