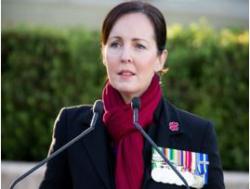 Air Force Association Victoria will host a ‘Meet-a-Mate’ event to be held at the former Officers’ Mess at RAAF Base Point Cook on Friday August 16th, 2019 commencing at midday. Keynote Speaker will be Wing Commander (Retd) Sharon Bown who will speak about her deployment experiences in Timor-Leste and Afghanistan.  Sharon’s presentation will be followed by a light lunch, tea/coffee, and soft beverages. There is no charge for attendance. Air Force Band Wind Quartet will provide background music during lunch.

Sharon served in the Royal Australian Air Force as a Nursing Officer.  In 2004, when working as an aeromedical evacuation nurse she was seriously injured and narrowly escaped death in Timor-Leste when the UN helicopter she was travelling in crashed in a violent storm. Sharon survived a broken back, a shattered jaw, and aviation fuel burns.  Not surprising, she was diagnosed with Post-Traumatic Stress Disorder.  A young woman of tremendous resilience, Sharon later served as a commander of a surgical team in Afghanistan in 2008.

Sharon is a highly regarded motivational military speaker who was appointed in 2016 for a three-year term to the Council of the Australian War Memorial.  She is the author of the book, One Woman’s War and Peace…a nurse’s journey through the Royal Australian Air Force. Sharon is a member of the Air Force Association and its representative at the Female Veterans and Families’ Forum.

RAAF Base Point Cook is a controlled entry facility.  Therefore, for entry to the base and catering purposes you are required to advise Barb Stallard at office@afavic.org.au or 03 9813 4600 no later than Wednesday July 24th, 2019 of your attendance and the name of any person accompanying you.

Add to My Calendar