Stories of the Armistice: The Signing of The WW1 Armistice

Close to midnight on the 7th of November 1918, a German delegation crossed the front line with white flags flying, where a train was waiting to take them to a secret rendezvous in the great forest of Compiègne.

Germany was required to withdraw behind the Rhine and hand over vast numbers of ships, artillery pieces and railway locomotives; Allied prisoners of war were to be released but Germans remained in captivity and the naval blockade continued until the Treaty of Versailles was concluded.

Germany was given 72 hours to accept or reject the terms but, meanwhile, the war would go on. Eventually, after referring the terms back to Berlin, the German delegates were authorised to sign.

At 5.30 am on the 11thof November 1918 both delegations signed the Armistice - the Germans with tears in their eyes.

General Foch declared the proceedings over, then waved the German delegation away with these words:

Instructions were then issued by General Foch to all Allied units to cease fire at 11am that morning, the 11thof November 1918.

The Armistice and the subsequent Treaty of Versailles with its punitive conditions, were to feed growing resentment within Germany that contributed to the rise of Adolf Hitler and the Second World War.

Join us on Sunday 4 November at RAAF Base Point Cook to honour the memory of those who served in the Great War. 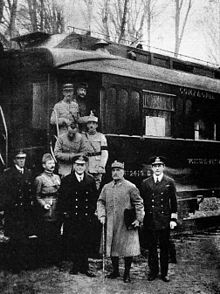 Above, left: The Forest of Compiègne, France – the site of the Armistice between the Allies and Germany which ended World War I on 11 November 1918.

Above, right: The ‘Armistice carriage’ – Photograph taken after reaching agreement for the Armistice that ended World War I. This is Ferdinand Foch's own railway carriage and the location is the Forest of Compiègne. Foch is second from the right. Left of Foch in the photo is the senior British representative, Sir Rosslyn Wemyss. On the right is Admiral George Hope.