In making the announcement, Veterans Affairs Minister Darren Chester said Ms Bown was “uniquely placed” to speak on Anzac Day as we face new challenges as a nation.

“Sharon has fought back from serious injuries and illness and is well equipped to talk on behalf of veterans and service personnel on one of the most important days of the year,” Mr Chester said.

In 2004, when working as an RAAF aeromedical evacuation nurse Sharon was seriously injured and narrowly escaped death in Timor-Leste when the UN helicopter she was travelling in crashed in a violent storm. She survived a broken back, a shattered jaw, and aviation fuel burns, and not surprisingly, was diagnosed with Post-Traumatic Stress Disorder.  Sharon later served as a commander of a surgical team in Afghanistan in 2008.

Sharon is a highly regarded motivational military speaker, author, and a member of the Air Force Association and its representative at the Female Veterans and Families’ Forum. 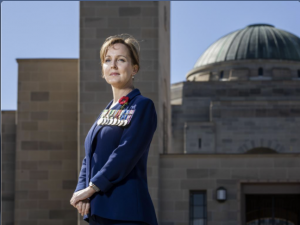