Tetbury – Remembering the AFC a century on

The rolling, green hills of the Cotswolds is hardly where you would imagine being a place that played a major role in the Great War, yet the historic market town of Tetbury in Gloucestershire, UK was home base to 1st (Training) Wing Australian Flying Corps between 1917 and 1919.

Remembrance Day 2017 marks the centenary year of the 1st (Training) Wing’s arrival in Tetbury, and on this day Group Captain Carl Schiller OAM CSM (Retd), presented on behalf of the Air Force Association a bronze plaque paying tribute to the kindred relationship between the Australian Flying Corps (AFC) airmen and the Tetbury townspeople, and commemorating the airmen who died during the Wing’s operation from nearby Leighterton and Minchinhampton airfields.

Commanded by LtCol Oswald Watt, the Wing comprised Nos 5, 6, 7 and 8 Squadrons that formed an aerial combat training and resupply facility for the AFC squadrons deployed in the Great War.

The presentation took place in the town’s historic Market House. 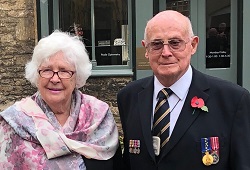 The day prior to Remembrance Day, the ‘Australian Contingent’ comprising Carl and Christine Schiller, and John Capp, OAM and Maureen Capp, OAM, were shown the former AFC airfield sites, the cemeteries at Minchinhampton and Lasborough, and a tour of the 18th century Chavenage House where the AFC occasionally ‘dropped in’ on the back lawn for a ‘cuppa’ and conversation.  John Capp’s father was an Air Mechanic in the AFC. People who watch the popular TV series ‘Poldark’ might recognise the house as being the Poldark’s family home.

The 11.00am Remembrance was held at the Market House followed by the presentation of the plaque at 3.00pm.  The Australian National Flag was flown above the Market House in honour of the occasion. The Town Crier introduced Mrs Jane Haines (Chair of the History of Tetbury Society) and Mr Barry Barnes, local aviation artist and amateur military historian, who was largely responsible for raising the awareness of the AFC’s operation to the current generation of local and surrounding village people. Barry Barnes provided a history brief on the AFC’s presence and its impact on the region.  Jane Haines presented to the Air Force Association (Victoria) a bound book of the Service Records of the Fallen AFC airmen who perished in training accidents or died because of illness, including those that succumbed to the dreaded 1918 flu pandemic. Barry Barnes presented Carl Schiller with a painting of Captain Harry Cobby’s brightly painted Sopwith Camel aircraft in flight.

A further aspect of the event was the exchange of Lions’ Club banners between Carl Schiller, on behalf of the Point Cook Lions’ Club, and Mr Stephen Parr of the Tetbury Lions’ Club. The occasion was attended by the town’s dignitaries, including the Mayor of Tetbury, Chair of Feofees, members of the History of Tetbury Society, various church and service groups, representatives of the British Legion, and serving veteran British Army personnel from a nearby logistics regiment. 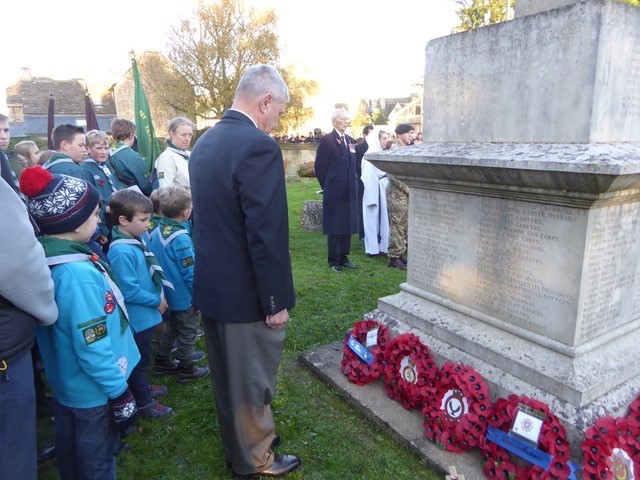 The following day, the ‘Australian Contingent’ attended a cross-denominational church service at St Mary’s the Virgin in Tetbury, a magnificent 18th Century Gothic cathedral.  The Rector, Rev Poppy Hughes, announced to the congregation of about 400 people that Australian Air Force Association representatives were present to pay their respects to the Fallen.  Following the service, Carl Schiller participated in a march through the town and laid a wreath commemorating the AFC in the nearby St Saviour’s churchyard.

The occasion, was wonderfully organised by the History of Tetbury Society who are a dedicated team of local historians whose fondness of the AFC’s connection with the town cannot be underestimated. Our ‘Australian Contingent’ was warmly received and highly regarded for its efforts to travel from Australia.

The Air Force Association has made an impact on the Tetbury townspeople and will be fondly remembered.

The trip to Tetbury was undertaken at the personal expense of the Schillers and Capps.