Alice Ross-King (1887-1968) was an Australian civilian and military nurse who served in WW1 and WWII. Alice was born at Ballarat, Victoria. The family moved to Perth when she was young but following the tragic drowning of her father and two brothers, Alice and her mother settled in Melbourne.
Alice was attracted to nursing at a young age and assisted with the general duties at the Austin Hospital before undertaking formal training at the Alfred Hospital. Prior to WW1, Alice had become a formally qualified nurse, night superintendent and acting matron. She became a theatre ‘sister’ and oversaw a private hospital in Collins Street.
She enlisted as a staff nurse in the Australian Army Nursing Service, Australian Imperial Force, on 5 November 1914; her surname was hyphenated to Ross-King to distinguish her from another Alice King in the Service.
Shortly after, Sister Ross-King was posted overseas to serve with 1st Australian General Hospital (1st AGH) in Egypt and then to an outstation at Suez to care for casualties from the Gallipoli Campaign. Following returning to Australia at the end of 1915 when she nursed the wounded returning home, Alice returned to 1st AGH in Rouen, France where she nursed throughout 1916 including the Somme offensive. In July 1917, she was sent forward to the 2nd Australian Casualty Clearing Station close to the trenches at Trois Arbres near Armentières. Within a few days of her arrival the station was bombed. Alice Ross-King was awarded the Military Medal for her bravery during the attack. She was one of only seven nurses of the AANS to be awarded this honour during the Great War.
Alice returned to 1st AGH in November 1917 and remained with the hospital until the end of the war. In May 1918 Ross-King was awarded the Associate Royal Red Cross and on Christmas Day she was ‘mentioned in despatches’. Alice returned to Australia in February 1919 and was discharged from the Army in September that year.
Alice had become engaged to an AIF officer who was killed at Fromelles in July 1916. However, on her voyage home she met Dr Sydney Appleford who she married in August 1919. They settled in Lang Lang, Victoria where they raised four children.
Between the World Wars, Alice trained Volunteer Aid Detachments in Victoria. She was commissioned with the rank of major in the Australian Army Medical Women’s Service during the WW2 and was appointed senior assistant controller for Victoria responsible for all Australian Army Medical Women’s Service personnel in the State. In 1949, she was awarded the Florence Nightingale Medal, the highest award made by the International Committee of the Red Cross. Alice was one of two Australian nurses to receive the medal in 1949. Her citation read:
‘No one who came into contact with Major Appleford could fail to recognize her as a leader of women. Her sense of duty, her sterling solidarity of character, her humanity, sincerity, and kindliness of heart set for others a very high example.’
Alice post deceased her husband in August 1968. She was buried in the Presbyterian section of the Fawkner Cemetery, Melbourne.
The Air Force Association (Western Australia Division) named its new, 102 bed, Residential Care Centre at Bull Creek ‘Alice Ross-King Care Centre’ in honour of this great Australian. 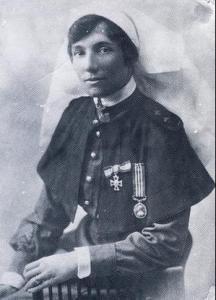